The following article was authored by Scott Braddock and originally published on Construction Citizen.

A commitment ceremony was held this past week for dozens of Houston students in a new dual credit, two-year construction certification program at Houston Community College. The whole thing is being done in partnership with MAREK, one of the largest specialty construction companies in Texas and the southeastern United States.

Students in the Houston Independent School District’s new construction Career and Technical Education (CTE) program attend Austin and Milby high schools and “spend a portion of their instructional day at HCC’s Southeast Campus, where they learn general construction skills from a former MAREK field supervisor who is a certified drywall craft instructor,” per information from the HISD.

Those same students will work as paid interns at MAREK next summer. That way, by the time they graduate in 2021 they’ll have earned a Level I certificate from HCC, drywall credentials, and they will have job offers in hand from the company.

“I believe this is an opportunity for each and every one of you. I tell people all the time that there’s doors in life that open, and so this is one of those,” said Jorge Rodriguez, MAREK Managing Director, speaking at the ceremony. “Hopefully you desire to sidestep through that door and hopefully join a career with MAREK because that’s what we’re offering you.”

“I compliment you on seizing the opportunity, on knowing that there is a career here,” said HCC Chancellor Dr. Cesar Maldonado. “One of the things that excites me the most is the dual credit component. You’re going to earn college credit from HCC while you’re finishing high school. Think about that. You’re going to exit high school with a college certification and no debt. That doesn’t happen very often,” he said. 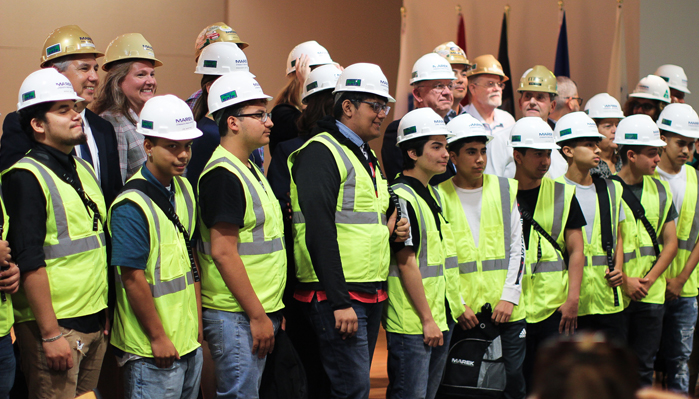 Maldonado stressed that success is so often determined by preparation in advance of opportunity. “When opportunities come your way, you have to be ready for them,” he said, adding that these students are getting ready for exactly that.

The head of MAREK said they did not come up with the idea on their own, but instead wanted to build on something that’s proven successful.

“We want to thank Beau Pollock of TRIO Electric who was really the pioneer of this with ACC and Spring Branch,” said CEO Stan Marek.

“It’s been done before, and we were so intrigued with the concept and how well it worked for Beau that we just had to jump into it,” Marek said, referring to the program covered previously by Construction Citizen.

“This is the first of many, and we were talking about getting many of our fellow contractors involved and hiring more men and women. I really think this is the way it needs to be done,” Marek said. “Making the transition from school to home to work life…we want to make it a little easier.”

“One thing my dad told me, and I’ve told my boys, he said, ‘Son, this company doesn’t exist for you, it exists for your employees. Without your employees, you’re nothing. You’re an empty building. Those men and women that build your jobs, they represent you.’ It’s never, never been more true than it is today,” he said.